Home Health Should You Really Be Storing Eggs In The Refrigerator? 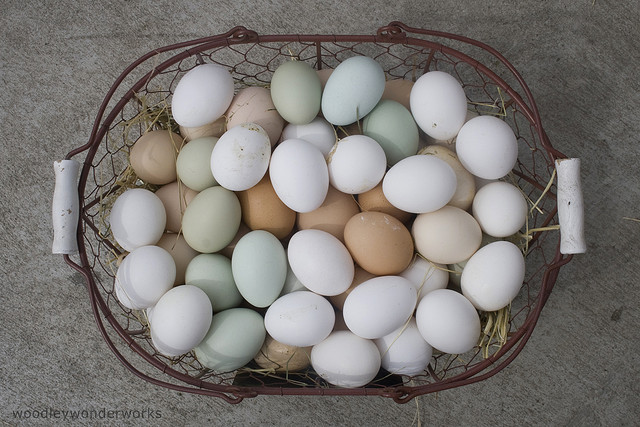 Chances are, if there are eggs in your home right now, they’re in your refrigerator. Did you know the U.S. is one of the only countries where that happens? In much of the world, eggs are simply stored on the counter at room temperature.

The only reason eggs are refrigerated is to help reduce salmonella risks. If infected with the disease, the bacteria will grow inside of the egg quickly if at room temperature, especially if they’re more than 21 days old. But why is there even a risk of salmonella contamination?

The way most eggs are raised in the U.S. is an industrialized process. Hens are often crammed into tiny quarters with no space to move around at all. Disease is common and the birds are incredibly filthy. Chickens aren’t naturally nasty animals, but when imprisoned that way, they can’t clean themselves at all.

Some of these concentrated flocks contain 30,000 birds or more, and eggs from caged hens have many times more salmonella bacteria in them than from smaller, free range flocks. The threat of salmonella is even worse because the strains are more likely to be antibiotic-resistant. We employ egg washing to stymie these bacteria, but the practice is banned in Europe.

If you cram 30,000 hens into one building, they’re going to spread feces and contaminants everywhere. The solution in the U.S., rather than simply feeding them good food and giving them the correct living situations, is to wash the eggs. It’s not as harmless as it sounds though.

The eggs are scrubbed, rinsed, dried, and then sprayed with chlorine. During this process, the natural barrier in the egg that protects the would-be chick from disease can be compromised, causing the bacteria to spread inside of the egg. And what’s our solution to that problem?

So what are the possible solutions to this problem? For one, buying organic eggs helps. Organic flocks are usually much smaller and can free range. This makes eggs far less likely to be infected with salmonella. They’re also considerably more nutrient dense than their CAFO counterparts.

As far as washing goes, organic eggs are washed but they can’t be washed in the same way. It’s a simple wet cleaning. Sometimes they use dry brushes too, so no liquids or chemicals at all.

So should you refrigerate your eggs? Probably. But you should also know why we refrigerate our eggs and take action.