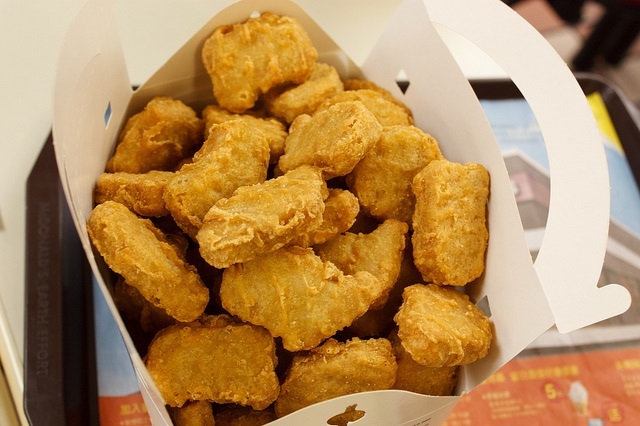 Last week, McDonald’s Japan apologized to a customer after they found bits of blue plastic in an order of their Chicken McNuggets. As a result, McDonald’s has pulled a million McNuggets from the factory. Another customer found a piece of vinyl in their McNuggets.

“We deeply apologize for the trouble we have caused our customers and we are taking quick measures to analyze the cause of the contamination,” said company spokeswoman Takashi Hasegasa.

This isn’t even the worst thing found in McDonald’s food. Just last August, a customer in Osaka complained after finding a piece of a human tooth in their french fries order. Yuck!

McDonald’s has been having some poultry issues though. Last July, McDonald’s had to shut down its poultry supplier in China after the company began mixing fresh chicken with expired chicken meat, making it a potentially deadly health hazard for consumers.

Stories like these have led to a 10% drop in McDonald’s sales just in the last year, according to CNN. McDonald’s is trying to smooth it over with discounts, giveaways, and new nuggets made of tofu. Interesting.

One thing is for sure, as stories like this surface, people begin to realize the value of good, local, organic food.

Study: If You Shop At The Dollar Store, You’d Better Stop